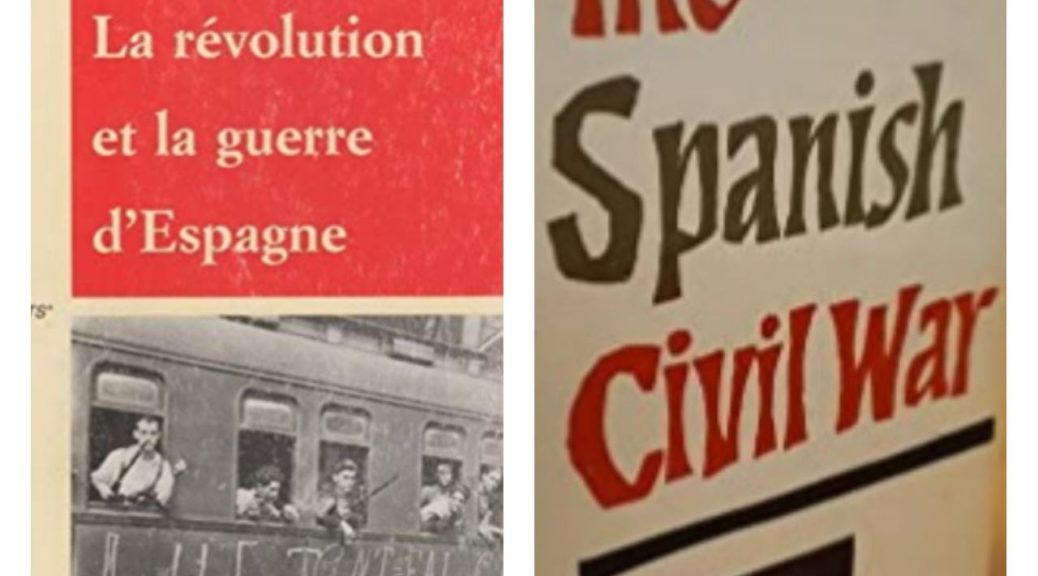 In 1961, 25 years after the military coup that sparked off the Civil War, two important books on the conflict appeared, one in English (The Spanish Civil War by Hugh Thomas) and the other in French (La Révolution et la Guerre d’Espagne by Pierre Broué and Emile Témime). These were perhaps the first books written by a generation of historians uninvolved in the events themselves, all being children in the 1930s . To mark the sixtieth anniversary of their publication we publish this blog-post on these two books and their reception in the 1960s.

La Révolution et la Guerre d’Espagne is a remarkable work which is divided into two parts; the first, by Broué, examines the revolutionary process in 1936-37 while the second, by Témime, is an account of the international aspects of the war and the construction of the Francoist Dictatorship. In the introduction the authors explained this approach, admitting their differences of sympathy –  Témime being more sympathetic to the “progressive Republicans and the moderate Socialists in his concern with organisation and efficiency and the world balance of power” while Broué felt that “those who fight revolutions half-heartedly are merely digging their own graves” (p 14). Their aim was, they added:

“in the face of ignorance, neglect, and falsification, to recreate this struggle in the most truthful possible way and to rid it of the legend which had prematurely buried it.” (p. 7)

It was the first part which received most attention. The attempted military coup of July 1936 which sparked off the Civil War also provoked a widespread social revolution in the areas of Spain which resisted the coup. Yet, in the years after the war this revolution had been largely ignored by historians or treated as insignificant.

Using the concept of “dual power”, evocative of events in the Russian capital Petrograd after the collapse of the Czarist regime in February 1917, Broué explores the complex situation produced by the collapse of the Republican state and its replacement by the local committees which sprang into life in 1936. He traces the stages by which, against the background of the defeat of Republican forces on the battlefield, the Republican state was rebuilt under the government of Largo Caballero (Sept 1936-May 1937). The tensions this produced and the rise of the Communist party as the party of counter-revolution formed the background to the crisis which erupted in Barcelona in May 1937, after which the revolutionary groups and parties were marginalised under the new government of Juan Negrin.

In the second part of the book Témime argues that the failure of Britain and France to support the Republic was crucial for the war’s outcome, turning almost inevitable defeat for the rebel generals into almost inevitable victory. This points to the tension in their accounts: Broué sees the defeat of the revolution as depriving the Republican war effort of the enthusiasm of peasants and workers, while Témime identifies fear of social revolution as a key motive for the hostility towards the Republic of the British and French upper-classes.

The book was enthusiastically reviewed by the U.S. historian Gabriel Jackson, whose own account, The Spanish Republic and the Civil War 1931-1939, was published in 1965. Writing in the Hispanic American Historical Review in 1962 Jackson praised the work as “the best general interpretation available concerning both the revolution of 1936 and the war”, adding that:

“it is especially valuable for analysis of the C.N.T., the P.O.U.M. and the anarchists in both the industrial and rural areas of Catalonia.”

In France the reviews were more mixed, with Antoine Prost in the Revue d’histoire moderne et contemporaine (October-December 1962), pointing to the authors’ lack of an adequate analysis of the pre-war Republican period and of the agrarian problems of Spain. Prost, however, praised the work as an important advance in the study of the conflict, adding that further research was necessary and that the history of the war remained to be written. After the book was finally published in an English-language edition in 1972, the U.S. historian Temma Kaplan described it as the “best single volume” on the Civil War in a review in the Hispanic American Historical Review (1974).

Both authors went on to enjoy distinguished careers as historians in France but, sadly, La Révolution et la Guerre d’Espagne was never updated to take account of new sources and new interpretations.

Hugh Thomas’s The Spanish Civil War quickly became the standard work on the subject in English, bringing the author fame and wealth. Thomas had no background in Spanish history – and, indeed, had to start his task by studying Spanish. Like Broué and Témime he benefited from being able to interview many of the surviving key figures involved. Perhaps reflecting his brief previous career as a British diplomat, Thomas stressed the international and diplomatic aspects of the conflict. His approach is best described as “narrative”; at times this leads him to shift in the space of two or three pages between concurrent developments in several different locations (Salamanca, Barcelona, Bilbao, Washington, London etc). This narrative approach was, perhaps, the key to the book’s success: telling the story of the war to a generation of readers outside Spain who had no memory of the events as well as to an older generation whose memories were patchy.

The Spanish Civil War received enthusiastic reviews in the British press, including from journalists such as Claude Cockburn who had reported on the war, as well as from Peter Kemp, one of the few British volunteers who had fought in Franco’s rebel forces. In the United States, Vincent Sheean, who had covered the war for the New York Herald Tribune, praised it in the New York Times (9 July 1961) saying

“there is something quite wonderful about a book which is written on a thing which the author never saw and never could have seen. (…) (Thomas) has understood it incredibly well and has written it superbly”.

Some historians were, however, less impressed. In the review in the Hispanic American Hispanic Review cited above Jackson criticised the author for relying too heavily on accounts by Francoist historians such as Manuel Aznar. This, he argued, led Thomas to accept what Jackson describes as “an obviously forged document” alleging a Communist plot to overthrow the Republic (the claim of such a plot was the basis of the military rebels’ attempt to legitimise the coup and the Franco Dictatorship).

He also criticised Thomas’s acceptance of the Francoist figure for the number of people murdered in the Republican zone– which was taken from the Causa General, the Franco Regime’s mammoth general prosecution brought against people alleged to have committed crimes in the “red zone” during the war.

Jackson also criticised what he called “the tone of unpleasant scorn” adopted in discussing the repression “as though dealing with the melodramatic customs of a barbarian people”.  He concluded that

“in a strict scholarly sense it can be recommended for its coverage of the international aspects, but as military and political history of Spain it spreads more confusion than light.”

Inside Spain The Spanish Civil War was reviewed in academic journals such as the Revista de Política Internacional (No 60, 1962) and the Revista de Estudios Políticos (No 161, 1961), but Thomas recognised that there was no prospect of it being published in the country.

Despite this, it would become an important work in Francoist Spain as a Spanish translation was published by Ruedo Iberico, which had been established in Paris to challenge the regime’s control over publishing inside Spain. The book was smuggled across the frontier and sold clandestinely. The first Spanish print-run of 5,000 copies sold out very quickly.

The book’s popularity in Spain forced Manuel Fraga Iribarne, Spanish Minister of Information & Tourism (1962-1969) to establish a centre of Civil War Studies under Ricardo de la Cierva, in an attempt to reassert the Franco regime’s version of the Civil War as a “crusade” against Marxism, liberalism and freemasonry.

A revised English-language edition of The Spanish Civil War was published as a paperback in 1965 and it was revised substantially for third and fourth editions which were published in 1977 and 2003. By this time the author’s political views had changed significantly, leading him to become a key advisor to Margaret Thatcher’s Conservative government in the 1980s. The later editions are much longer than the original, carry much more extensive footnotes and respond to some of the criticisms of the first edition. In particular, Thomas expanded his discussion of the revolutionary process of 1936-37, which he, like so many other writers before Broué and Témime, had badly neglected in the first edition. His account of the Second Republic was also improved and extended with the assistance and advice of Paul Preston, who had been his doctoral student.

Sixty years after their publication, how are we to assess these two books?  The authors had the advantage of being able to interview many of the survivors but, at the time, many of the archives were closed, particularly in Spain where the regime maintained a close watch on challenges to the official version of the country’s history.  Both La Révolution et la Guerre d’Espagne and the early editions of The Spanish Civil War have long been superseded by the work of later historians, but the authors were pioneers in the field and had a lasting impact. Their books introduced new generations of readers – inside Spain as well as outside – to the history of the war and some of these readers themselves went on to research and write on the subject.