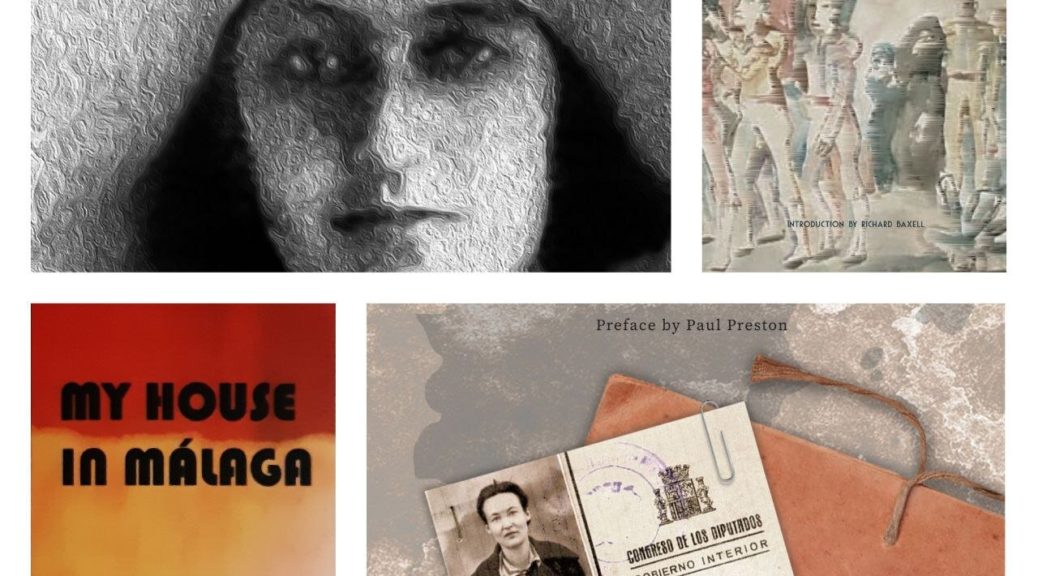 In a previous article [Memoirs of the War & Post-War by female writers] we discussed the memoirs of Constancia de la Mora, the grand-daughter of Antonio Maura (Spanish PM under Alfonso XIII) who became director of the Foreign Press Office during the Civil War. Her memoirs were first published in English in the United States in 1939 under the title In Place of Splendour.  The English-language edition has been out of print since then but has now been republished by a London publisher, Clapton Press, as part of a new series of memoirs of Spain in the 1930s. To mark the launch of this series this post reviews a few of the books so far published.

In an interview Simon Deefholts, Managing Director of Clapton Press, argued that the 1930s was

a critical decade not only for Spain but across Europe as a whole. The fight to defend the Republic was seen by many outside Spain as their first opportunity to take a stand against increasingly aggressive right-wing ideologues. It attracted a whole range of people from different backgrounds who provided support in a variety of ways. Many of them wrote vivid accounts of their experiences that have now been out of print for more than eighty years and can only be accessed in specialist libraries or at vast expense for collectors’ copies.

The Clapton Press aims, he added, to

make these primary sources available at a reasonable cost. Nearly all of the people who volunteered to help defend and support the Republic – in a variety of ways – showed great courage and determination, so we feel that it is important to provide direct access to their first-hand accounts.

In Place of Splendour , which includes an introduction by her biographer, Soledad Fox Maura, provides an account of the author’s conservative elite upbringing and her subsequent radicalisation during the Second Republic. Along with her second husband, Ignacio Hidalgo de Cisneros (head of the Republican airforce), she became a key figure in the Republican war effort. Her knowledge of foreign languages made her an important figure in the Foreign Press Office in Valencia: although she censored their dispatches, correspondents appreciated her help in arranging accommodation, organising interviews and arranging transport to the battle-front. According to Paul Preston her ability to communicate with journalists was assisted, when necessary, by her knowledge of English obscenities. After the press office moved, along with the Republican government, to Barcelona in October 1937, she became its director.

In Place of Splendour  was completed in the months after De la Mora’s arrival in the United States in January 1939. Soledad Fox and others have concluded that it was ghost-written by Ruth Mckenney with assistance from Jay Allen, the former Chicago Tribune correspondent. Noticeably the book does not mention the fact that De la Mora and her husband were both members of the Spanish Communist Party and it generally plays down the party’s role in the Republic during the Civil War. Despite this, her memoirs provide insights into the working of the Republican war-effort at a high level. On publication in November 1939 it attracted favourable publicity in the United States and sold very well. Shortly afterwards De la Mora settled in Mexico where she translated the book into Spanish; the first Spanish edition was published in Mexico in 1944.

The outstanding new publication by the Clapton Press is Never More Alive: Inside the Spanish Republic, the memoirs of Kate Mangan. In his introduction Paul Preston writes:

ever since I first read the manuscript about fifteen years ago, I have longed to see it in print. I regarded it when I first read it, and ever more so with each subsequent reading, as one of the most valuable and, incidentally, purely enjoyable books about the war.

An English artist who had studied at the prestigious Slade School of Arts in London, Mangan visited Spain and Portugal in 1935-36 with her boyfriend, Jan Kurzke, a refugee from Nazi Germany. After their return to Britain in August 1936, Kurzke was an early volunteer for the International Brigades, arriving in Madrid at the beginning of November 1936. Mangan followed him soon afterwards and, unable to be near him, supported herself by translating, interpreting and writing. Her experiences, as a foreign woman, could not be described as typical of the population, but her account describes many aspects of life in Republican Spain in 1936-37, particularly the problems of food supply, the difficulties of transport and the conditions endured by the large number of refugees from war and Francoist repression. She describes vividly the hospital conditions – the lack of medicines and adequate hygiene, the poorly trained staff, the badly wounded soldiers. There are also descriptions of conditions in Barcelona, which she and Kurzke passed through on their journey out of Spain in July 1937.

Like Constancia de la Mora, Kate Mangan worked for a time in the Foreign Press Office in Valencia. Mangan’s motives for visiting Spain and her lack of a political background help make her account less partisan than many others. The book sparkles with details of journeys and places as well as with her incisive profiles of the journalists and writers she encountered.

Jan Kurzke’s memoirs have also been published for the first time in this series as The Good Comrade: Memoirs of An International Brigader with an introduction by Richard Baxell.  Kurzke describes firstly, his pre-war experiences tramping around Spain and busking with a group of emigrés in 1934-1935 and then, following a break in Britain where he met Kate Mangan, his service with the International Brigades [see his record on Sidbrint here ]. This is an account of the soldier’s experience of war: he often writes in short sentences, which, as Baxell remarks, “read much like a series of diary entries, helping to create a real sense of immediacy”. Kurzke was seriously wounded in the leg at Boadilla del Monte in December 1936 and, after hospitalisation in Madrid, was moved to Murcia, where Mangan tracked him down and arranged medical help for his recovery.

Both Mangan’s and Kurzke’s memoirs end with their departure, but their later lives are covered in these volumes by other means, including letters and brief biographical notes by their daughter, Charlotte. Between 1940 and 1941 Kurzke was interned on the Isle of Man as an enemy alien by the British government. Kurzke and Mangan never married and, in 1945 Kurzke married a young actress. This perhaps, will not surprise readers of both volumes; Kurzke’s memoirs never even mention Mangan.

My House in Málaga by Sir Peter Chalmers-Mitchell has been out of print since first publication in February 1938. The author, an eminent Scottish zoologist and the founder of London Zoo, Chalmers-Mitchell, retired to live in Málaga in 1932 and stayed in the city after the July 1936 military rebellion. The main focus of his memoirs is an account of his life in the city during the six months before its occupation by rebel forces in February 1937. At the centre of this is his relationship with his neighbours, the Bolín family, whose cousin Luis Bolín was a prominent supporter of Franco. Fearing for their lives, the Bolíns sought refuge and help from Chalmers-Mitchell and their house was taken over by local anarchists for use as a hospital. Although Chalmers-Mitchell eventually helped the family escape to Gibraltar, he enjoyed good relations with the Republican authorities and local anarchist leaders. His memoirs detail the deterioration of conditions in the city and the effects of repeated rebel air attacks. In a letter to The Times in October 1936, he attempted to counter the exaggerated claims of violence and bloodshed in Málaga which had been made in the British press on the basis of the reports of refugees and rebel supporters in Gibraltar. This letter did not endear him to the rebel authorities.

Despite his role in assisting the Bolín family, Chalmers-Mitchell was arrested along with his guest, the journalist Arthur Koestler, by Luis Bolín after the Italian occupation of Málaga. While Koestler was imprisoned in solitary confinement in Seville for over three months and subsequently released in a prisoner-exchange, Chalmers-Mitchell was, in effect, expelled from rebel-held Spain. He returned to Britain where he used his extensive contacts to secure Koestler’s release and to assist the public campaign in support of the Republic.

My House in Málaga also includes an account of a meeting with the writer Ramón J. Sender and his family in Madrid weeks before the military coup. He had earlier translated Sender’s 1932 novel Siete Domingos Rojos into English (it was published as Seven Red Sundays in April 1936) and his translation of Sender’s account of the opening months of the war was published in 1937 as Counter-Attack in Spain.

Simon Deeffholts has ambitious plans for future publications, pointing out that “there are still many valuable resources which are currently unavailable outside specialist libraries, or only available at vast expense.” Among the publications planned for 2022 two will particularly attract readers interested in the Civil War: new editions of The Last Mile to Huesca by Agnes Hodgson and of Behind the Spanish Barricades by John Langdon-Davies.

The Last Mile to Huesca, with a revised introduction by Judith Keene, are the diaries of an Australian nurse who served in the Republican medical service in 1937. Arriving in Barcelona in December 1936 Hodgson, who had no political background and who had worked in Hungary and Fascist Italy, initially faced accusations of being a Fascist spy. Her diaries describe not only her experiences in the Republican medical service, but also her journey to Spain in November 1936 and her impressions on arrival in Barcelona, where she attended the funeral of the German international brigader Hans Beimler.

Behind the Spanish Barricades was written in a few weeks in the autumn of 1936 and is an account of the author’s two visits to Spain earlier that year as a correspondent for the London News Chronicle, the first in April-May and the second just after the July military rebellion.  Unlike many of the journalists who flocked to Spain after the coup, Langdon-Davies knew Spain well from before the war, having lived in Catalonia in the 1920s (he was the author of a well-received book on the Catalan national dance, the sardana).  His account describes his conversations with Spanish friends and his visits to several parts of Spain both before and after the coup . However, Behind the Spanish Barricades is particularly worth reading for his evocative impressions of Barcelona, both before the July 1936 military coup and in its immediate aftermath.

This is only a selection of the books published by the Clapton Press: a full list is available via their website