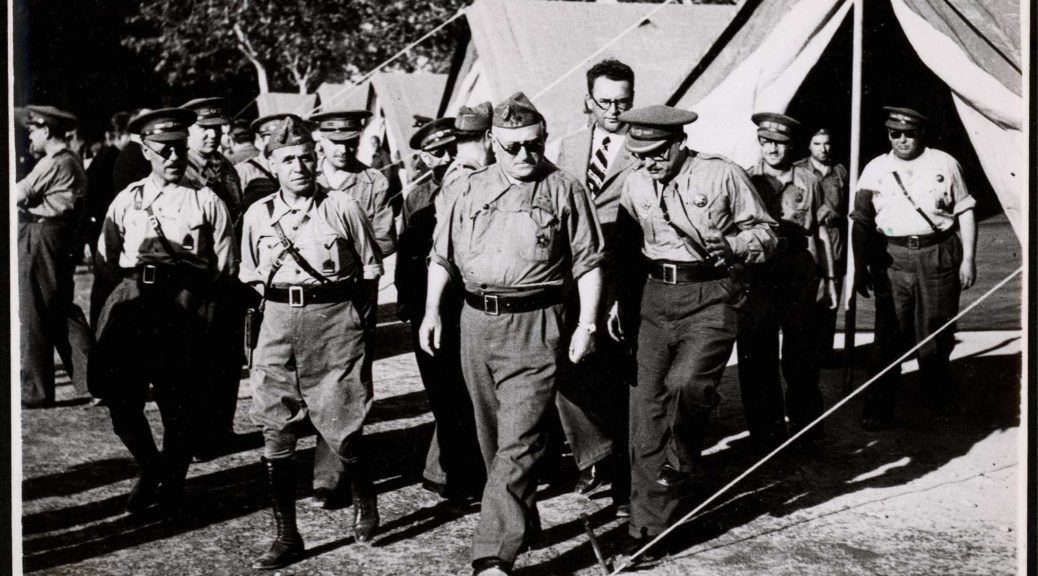 The two main archives which are fundamental for any research on the Civil War and the repression during the Franco Dictatorship are the  Centro Documental de la Memoria Histórica de Salamanca (CDMH) y el Archivo General Militar de Ávila (AGMAV), both of which were discussed in Part 1. However, these are not the only archives which contain documentary sources which are of interest for researchers.

Within the Sistema Archivístico de la Defensa (Defence Archive System), which covers the archives managed by the Ministry of Defence, those which are particularly relevant are the Archivo General e Histórico de la Defensa (General and Historical Defence Archive) as well as the other historical archives of the separate arms of the armed forces, namely those of the Army (Ejército de Tierra), Air Force (Ejército del Aire) and of the Navy (Armada).  Among these archives the following are especially important:

The most important part of the General and Historical Defence Archive are the records of the summary courts martial of the Territorial Military Tribunal which covered Military Territory No. 1 (TMT1). The lists of those prosecuted (listados de encausados) by the army have been indexed and are available online in relation to the provinces of Albacete, Alicante, Castellón, Madrid and Valencia.  These are of primary importance for research into the repression which followed the Civil War.

The records of the summary courts martial carried out by all of the Territorial Military Tribunals may be found by following this link to the Guía para la localización de los procedimientos judiciales incoados por la Justicia Militar a raíz de la Guerra Civil y durante la etapa franquista (Guide to the location of the judicial proceedings initiated by the Military Justice system as a result of the Civil War and the Franco period).  However, at the moment only the records of people prosecuted in TMT No. 3 and TMT No 4 are available. Those for TMT No. 4, covering the northwest of Spain, are available via this link  sumarísimos que se conservan en el Archivo Intermedio Militar Noroeste . For those for TMT No. 3, covering Catalonia, follow this link  Cataluña . The records of all of those prosecuted in the courts martials in TMT No. 1,  TMT No. 3 y TMT No. 4 are included in the database of ihr.world.  The Air Force Historical Archive (Archivo Histórico del Ejército del Aire) also provides online access to the records of those members of the Republican Air Force who were prosecuted  as well as the records relating to the purging of civilian personnel who had worked in the service of  Republican military aviation.

The General Military Archive of Guadalajara holds the archives and personal files of two types of forced labour battalions established for former Republican soldiers as part of the Francoist repression, namely the Batallones Disciplinarios de Soldados Trabajadores (Disciplinary Labour Battalions for Soldiers) and the  Batallones Disciplinarios de Soldados Trabajadores Penados (Disciplinary Labour Battalions for Convicted Soldiers) , as well as those of the military prisons and of the Concentration Camps of  Miranda de Ebro and Alcazaba de Zeluán (near Melilla). They may be consulted online via the introductory index of the Archive.  The database of  ihr.world includes part of the AGMG index of  138,000 members of these two types of forced labour battalions, including the 3,000 sentenced soldiers from the so-called 1ª Agrupación, as well as those from the Montjuïc military  prison in Barcelona (more than 3,000), and from the Zeluán concentration camp (1,000).

There are also collections of archives relating to the Civil War and the Franco Dictatorship to be found elsewhere in the state archives (Archivos de la Administración General del Estado).  These include not only the national history archives which are the responsibility of the Ministry of Culture (Ministerio de Cultura) but also the historical archives of the various government ministries. Without attempting to be exhaustive, we would underline the importance of the following:

In the National Historical Archive, among the contemporary archive collections of the Judicial System (Poder Judicial) there is documentation relating to the Popular Tribunals and Emergency Courts (Tribunales Populares y Jurados de Urgencia y de Guardia de Madrid), established under the Republican government in the immediate aftermath of the attempted coup of July 1936).  Following the defeat of the Republic these documents were included in the Causa General (the Francoist prosecution; see Part 1) as supporting evidence.  In the Personal Archive section there are personal archives dealing with some of the major political and military figures relevant to the conflict, including Manuel Azaña, Vicente Rojo, Diego Martínez Barrio, José Giral…

The General Archive of Administration, in Alcalá de Henares, holds two small but very interesting collections of material, namely those of the  Junta Delegada de Defensa de Madrid (the Defence Junta which ran Madrid under siege from Francoist forces between November 1936 and April 1937) and those of the  Ministerio de Defensa Nacional, (the Defence Ministry of the Republic between 1936 and 1939). There is also a large collection of archive material from the central, regional and local bodies of the so-called “Movimiento Nacional” (the name given to the single legal political “movement” authorised in Francoist Spain) which is indispensable for social research on the postwar period and the Franco Regime. Although the AGA is categorised as an “archivo intermedio” (an intermediary archive which is supposed to transfer all of its archive material to the AHN for permanent storage), it holds such a large amount of documentary material on public organisations during the Civil War and the Franco period, much of it not yet examined, that it is currently impossible to provide a clear picture of its value. However the archives from the civil war and postwar periods of the Ministries of the Interior and Foreign Relations (Interior y Asuntos Exteriores  are particularly relevant.

1. Military aspects of the Civil War

2. The Repression following the Civil War

3. Social and Political Implications and Consequences of the Civil War

4. The Civil War in my own locality

5. Personal histories of the Civil War

The sections holding the private and family archives and the collections in the Archivos Histórico Nacionales of the Ministerio de Cultura (CDMH, AHN, AGA) and in the Archives of the Sistema Archivístico de la Defensa (AGMAV, AGHD).

So why is there no need for a single “General Archive of the Spanish Civil War”?

Because it would serve no useful purpose to attempt to concentrate all of the collections of documents which, as we have seen, are currently held in Spain on the subject in one single location.  It would be convenient, perhaps, and we think that an amendment should be proposed to the Law of Historical Memory (Ley de Memoria Histórica) which would go some way to achieving this objective by establishing a single unified point of internet access to all of the archive collections mentioned above.  This would be a true internet portal to source documents on the Civil War and the Franco Regime, which would also include links to open source data initiatives on the subject such as  IHR World, Todos los Nombres or Brunete en la Memoria, and to library collections and to collections of historical newspapers.

Before completing this article we would like to add a brief mention of the main private archives, including those belonging to foundations, universities, political parties as well as personal archives. These also contain material relevant to the Civil War and to the Franco Dictatorship and the majority of these are accessible to the public.  We have serious doubts whether the action of some of these institutions in holding on to some of this material complies with current legislation, but this is not the time or place to go into this thorny subject….