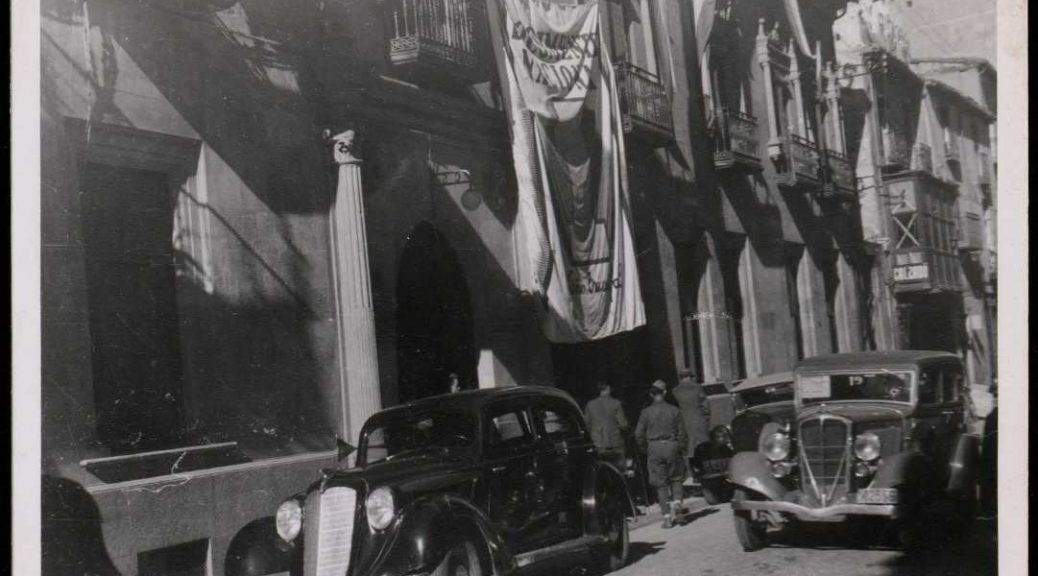 Publications by researchers on specific aspects of the Civil War and the Franco Regime appear with ever greater frequency, some of which, including those from people with a media profile, are multiplied by the social networks.  The majority of these,  moreover, of necessity refer to original documentary sources, and consequently cite the archives where these documents are to be found and where they have been consulted – or, at least, they should do this.

And this is the moment when the archivists, sometimes by means of social media, throw our hands in the air in exasperation…. We understand perfectly that this kind of research work is not easy and that it requires time and effort from people who,  in most cases, do not receive any kind of payment or reward for their efforts, and that sometimes they manage to lose the correct relationship between the documents and their context.  The problem is that, with regard to documents and archives, the context is much more important than it may appear.

As stated in the title, in Spain there is no such thing as a single “General Archive of the Civil War” (“Archivo General de la Guerra Civil”).  Instead there are many collections of documentary sources on the subject which are divided between lots of different archives,  some of them of a national character, but others regional, provincial, local, public, private…. People usually consider the Salamanca Document Centre of Historical Memory (Centro Documental de la Memoria Histórica de Salamanca) as the  “Archive of the Civil War”, but, in reality, this holds only the documentary sources which were, for many years, a section of the Archivo Histórico Nacional. As a section of the latter archive, they were known initially as the “Sección Guerra Civil” and later as the “Archivo General de la Guerra Civil”.  This, understandably, is the source of the confusion which we have mentioned.

The Centro Documental de la Memoria Histórica de Salamanca (CDMH) preserves the archive material from the Document Service of the Presidency of the Government (Servicios Documentales de la Presidencia del Gobierno) and from the Francoist-era  Special Tribunal for the Repression of Freemasonry and Communism (Tribunal Especial para la Represión de la Masonería y el Comunismo), along with others which were added after 1979, including documents transferred from other archives as a result of the promulgation of the Law of Historical Memory (Ley de Memoria Histórica) of 2007. Essentially, then, this archive contains the documentation produced by three of the Special Judicial Jurisdictions which were established for the purposes of repression during the Dictatorship, namely:

The Causa General is the name given to the “general prosecution” established in 1940 to investigate the crimes committed in Spain between 1931 and 1939, during what was referred to as “the red domination” in Francoist Spain. The 1,953 sets of files of the Causa General, preserved in 4,000 boxes. They amount to more than a million pages that have been digitised and are accessible from this link by clicking on the arrow icon.

In addition to these three large collections which derive from the major institutions which were responsible for the seizure and copying of the documents which the rebel forces carried out during the Civil War, the CDMH also contains a number of  collections of documents from public institutions, from both Republican and  Nationalist zones. There are also numerous private or personal or family or institutional archives, as well as collections of oral sources, which have been added from time to time, along with material from numerous donations.  All of this may be consulted online via the Introductory Index (Cuadro de Clasificación) which, in addition, is linked to a description and a digitised version (if this exists)  on the Portal de Archivos Españoles except in the case of the Causa General, which still has to be consulted on this website as part of the Archivo Histórico Nacional, even though physically the documents are now housed in the Centro Documental de la Memoria Histórica.

It is also worthwhile consulting the index of online databases (micrositios web de las bases de datos) of the CDMH, where the following can be found: information on the victims of the Civil War and those who suffered retaliation during the Franco Regime; Republican soldiers and members of the Republican forces of public order;  members of the Republican Army who were killed or were reported as disappeared in action; or who were deported to the Nazi concentration camps. To conclude, therefore, we could say that the CDMH, rather than being an archive “of the Civil War” is an archive of the postwar repression.

If there is really anything which may be considered as a most deserving of the title “Archive of the Spanish Civil War” it is the General Military Archive of Ávila [Archivo General Militar de Ávila (AGMAV)], which is one of the four historical archives of the Spanish army. This is where documentation dealing with the military aspects of the armed conflict are to be found, whether relating to the forces of the Republican government or to those of the military rebels.  The archive preserves information on the following: the different military units; the development of the military operations; the services of military intelligence; maps, plans and photographs of the conflict; personal files of men who enlisted in the rebel forces through the recruitment offices of the militias.  The Archive’s collections consist partly of material gathered at the end of the war by members of the Military History Service of the Ministry of Defence [Servicio Histórico Militar del Ministerio de Defensa] as a result of an order issued by General Franco in July 1939 requiring all military units to collect all documentation of a military nature, both of their own forces and that seized from the Republican Army, in order to establish what he termed the “Archive of the War of Liberation”  (“Archivo de la Guerra de Liberación”).

Along with this initial collection of documents, the Ávila archive also holds the following: the personal files of volunteers who enlisted in the militias formed by the Nationalists in the early months of the war; the personal files of the “Blue Division” (whose formal title was the “División Española de Voluntarios”) which was formed in 1941 to assist the armies of Nazi Germany in the invasion of the USSR; documentation from the now-extinct Ministry of the Army (Ministerio del Ejército), from the former Captaincy-Generals of the Military Regions of Spain (Capitanías Generales de Regiones Militares) and of the Gobiernos Militares (which operated at the provincial level) ;  documentation from other military establishments, such as Hospitals, Military Academies and Armaments Factories. A final part of its collections consist of private and family archives and collections.  The introductory index (cuadro de clasificación) may be consulted online, as well as the index of its historical and organisational structure.

Although these are the two main archives which should be consulted in any research on the Civil War and the repression during the Franco Dictatorship, they are not the only archives which contain important documentary sources which are of interest for research. We will give an account of the others in a later article.