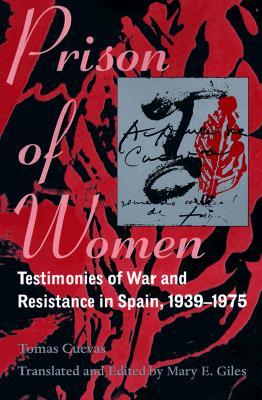 If you read this article and find it useful please consider making a donation to enable us to continue our work by following this link Thank you!

In a blogpost in 2019 we reviewed Tomasa Cuevas’s book Carcel de Mujeres 1939-1945. We mentioned that her book had been published in English in 1998 under the title Prison of Women: Testimonies of War and Resistance in Spain, 1939-1975 (State University of New York Press, 1998).  We were mistaken because Prison of Women is a different book from any of Tomasa Cuevas’s books published in Spanish. Today, to mark 23 April, which is celebrated as Dia del Libro (Book Day) in Spain we are publishing this article to draw attention to a book which will probably be unknown to our readers and to highlight the remarkable life and work of Tomasa Cuevas (1917-2007) and some of her fellow-prisoners whose lives are covered in it.

Prison of Women was translated into English by Mary E. Giles, a historian from the United States who is the author of several books on the Inquisition in Spain. In an introduction she explains how, by chance, in 1989, she came across Cárcel de Mujeres in a Madrid bookshop.  Five years later, through a mutual friend, she arranged to meet the author and together they spent three days selecting and organising material from Cuevas’s three Spanish publications. Prison of Women is the result of their labours and is both an autobiography of Cuevas and a portrait of largely forgotten aspects of Spain during the dictatorship. Although the structure of the book is provided by Cuevas’s own story, eleven of the twenty-three chapters are extracts from interviews which she recorded in the late 1970s with some of the women whom she had met in prison.

Cuevas grew up in Guadalajara and started working at the age of nine in a knitwear workshop. By the age of seventeen she was a member of the Spanish Communist Party.  She spent the Civil War in a variety of jobs including working in hospitals. At the end of the war she was arrested after being recognised and denounced by a neighbour from Guadalajara while catching a train for Madrid. She was sentenced by a court martial in a mass trial to thirty years imprisonment and began her journey through the nightmare world of the Franco regime’s prison system. Her sentence was subsequently reduced to twenty years and in 1944 she was released on licence and required to live in Barcelona. Re-arrested in 1945 for renewed activity in the Communist party, she was freed again in 1946 and lived under assumed names until 1953 when she escaped to live in France. In 1961, after the arrest in Spain of her husband who was also an active member of the Communist party, she was allowed to return to live in Barcelona.

One of the outstanding aspects of Cuevas’s book is her picture of the solidarity shown between the prisoners: the help given to older women and to those most at risk, the sharing of food parcels received from relatives, the support given to those awaiting trial and the activities organised in prison to keep up morale. In one prison, for example, the younger inmates played out a mock trial of Franco every evening, drawing lots to decide who should take on the hated role of the dictator.

Cuevas was sent to seven different prisons. In the women’s prisons in Madrid and Barcelona the prisoners benefited from visitors who were in touch with the clandestine prisoners’ support network run by the Communist party.  Most of the prisons outside Madrid and Barcelona were in convents, where – with one exception – the nuns seem to have been harsher on the prisoners than the guards. The worst prison was in the small Basque town of Amorebieta, which the prisoners called “the cemetery of the living”. Cuevas was one of 450 women who arrived one evening in 1942 at the already crowded gaol after a day-long train journey from Santander. She describes the scene next morning:

“With morning we could see the faces of the women in Amorebieta. Their skin was so yellow they looked as if they belonged to another race. Obviously these women were wasting away…The prison was a hell-hole. We women from Santander looked as if we’d been eating in a restaurant every day”

In mid-winter 1940 Cuevas and 350 other women were sent by freight train (they had to clean it out first as it had been used to transport animals) from Madrid to the Basque town of Durango.  After travelling for three days they reached the little town of Zumárraga where they had to wait overnight to change trains:

“It was very cold, and even before we got to Zumárraga we could see the ground all white with snow…When the town found out that there were political prisoners at the station, many people hurried to see us and even bring us things.”

“Every day new groups [of prisoners] arrived in Durango…There weren’t enough prisons in all of Spain for so many prisoners. That’s why convents like the one at Durango were converted into prisons. Finally more than two thousand women were housed in the converted convent in Durango along with scores and scores of children ranging in age from a few months – some had been born in gaol- to three and four years.”

When, she recounts, the population of Durango learnt about the children they arranged to provide homes for those under the age of two until arrangements were made for their families to collect them. She recalls that when the prison was closed a year later and the prisoners were sent elsewhere, many of the local people gathered at the railway station to present them with food for the journey. It is, perhaps, worth recalling the level of repression in Spain at this time and that only four years earlier, in April 1937, Durango had been destroyed by the aircraft of the German Condor Legion – in an attack very similar to that carried out on Guernica  – to appreciate these displays of courage and support towards political prisoners.

The interviews with fellow-prisoners tell of equally remarkable women and their hard lives. They include the stories of Nieves Waldemer Santisteban who gave birth in prison in Guadalajara;  Rosario Sánchez Mora, who had helped to assemble crudely-made bombs using dynamite during the Civil War and who lost a hand in the process; Esperanza Martínez who was arrested after spending time in the mountains with the guerrillas who fought the dictatorship in the 1940s and María del Carmen Cuesta , who was a minor when she was sentenced at the age of fifteen for membership of the Juventudes Socialistas Unificadas, the youth wing of the Communist party. There are also the stories of three women – Victoria Pujolar, Adelaida Abarca and Angelita Ramos – who escaped from the Les Corts prison in Barcelona and made their way across the frontier into France.

The prisoners whose lives are portrayed in this book are not typical of all of the women who experienced imprisonment in the post-war years. Many of those interviewed by Cuevas had been members of the Communist party and Cuevas herself continued to be active in the party and in resistance to the dictatorship until after the death of Franco in 1975.  Nevertheless, with its portrayal of an often forgotten aspect of the Franco dictatorship and of some of the extraordinary lives of those who survived the post-war repression, Prison of Women deserves to be more widely known and, perhaps, even translated into Spanish.

You may preview part of the book here