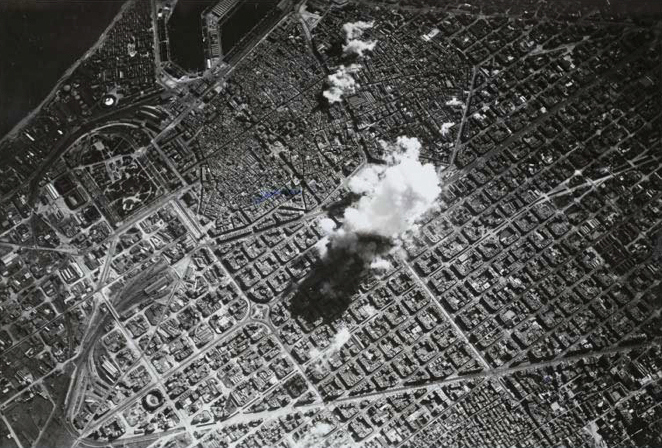 Tuesday 10 November –  At a quarter past ten at night feelings of alarm spread across the city as the sound of heavy gunfire in the distance. The official explanation given was that a coastguard vessel had opened fire at a suspicious vessel which was sailing without lights.

The year: 1936. The city: Barcelona. The author: the journalist Tomás Caballé i Clos in his book Barcelona roja. Dietario de la revolución (julio 1936 – enero 1939).  This account, recording the first attempt to bomb the city, is confirmed by the journal of a sailor on the rebel Nationalist cruiser Canarias, which is cited by Joan Vilarroya in Els bombardeigs de Barcelona durant la Guerra Civil (1936-1939) [PAMSA, 1999].

To mark the 79º anniversary of the first nighttime aerial bombing of the city of Barcelona, in 2016 the data-laboratory BTVDatalab of Barcelona Televisió created an interactive map which analysed the data available dealing with the bombing of the city, its air-raid shelters and the victims. Since 2017 Innovation and Human Rights has maintained this material online. Now 84 years after the event, we wish to commemorate this first attempt to bomb Barcelona from the air.

The interactive map allows the user to examine the data in three different ways: firstly on a contemporary map of the city, taken from the Arxiu Històric de la Ciutat de Barcelona and originally drawn in 1930 by Vicenç Martorell; secondly on a present-day map of Barcelona; and finally on a satellite image of the city.

As well as locating more than 500 exact locations where bombs fell, largely carried out by the Italian Airforce (Aviazione Legionaria)  under the orders of the rebel armed forces, the map shows the location of the main air raid shelters which were built under Barcelona by the Junta de Defensa Pasiva (Civil Defence Committee) and the city’s inhabitants.

The sites where bombs fell were located by using the material in Perill de bombardeig (2004) by Santiago and Elisenda Albertí, who used documents of the Junta de Defensa Pasiva which are held in the Arxiu Municipal Contemporani de Barcelona. With regard to the air raid shelters, the map shows the 1,354 shelters which have been catalogued by the Municipal Council (Ajuntament de Barcelona) and which are shown on their Archaeological Map. To explore the interactive map, click on the headline or here .

The three-minute long video provides an audiovisual summary of the 19 most deadly aircraft bombings of Barcelona during the Civil War. The attacks are presented in chronological order and indicate the number of victims. As a result of the work of historians such as Joan Vilarroya we know that these totalled 2,404.  Of these, 2071 victims have been identified by name and they have been included in the IHR centralised database of those killed during the Civil War and the Franco Regime.

View the Barcelona: 800 days under the bombs video on a computer but not by a mobile phone.

“Barcelona: 800 días bajo las bombas” is an online exhibition which further explores the memory of the victims and the human cost of the Civil War on the city. At present it is only available in Italian.  Follow this link for access .

Photo: Air attack on Barcelona on 17 March 1938, viewed from one of the Italian bombers.   Public domain.